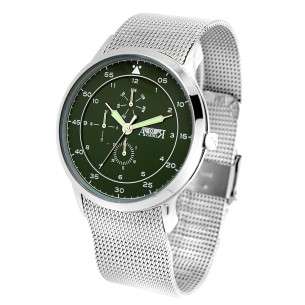 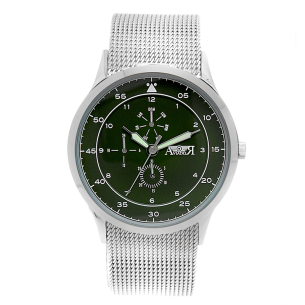 Receive it between Wed 6 and Thu 7

AV-1098
€103.31
Aviador Watch Red Baron AV-1098 with green dial and bracelet steel mesh.  The design of the Red Baron Aviador watch is inspired by the story Manfred von Richthofen, better known as Red Baron. He was considered by history to be the best military pilot in the First World War. Hero of the Germans and respected by his enemies because he allowed his badly...

Manfred Vob Richthofen, better known as the Red Baron for having painted his plane entirely red, managed to shoot down eighty enemy airplanes, making him the greatest ACE of military aviation of the First World War. Hero of the Germans and respected by his enemies, because he allowed his badly wounded victims to escape. His unit was responsible for the shooting down of 151 British aircraft, against 66 of its own, during the month of April 1917. For this he received the Pour le Mérite medal, the famous "Blue Max".

This collection is characterized by its vintage style and by its exclusive metal mesh belt, similar to those mounted on the watches of the legendary Red Baron. Such a belt is a technical solution that it marked the beginning of wristwatches, nearly a century ago.

Aviator specialists have created about 100 prototypes to make the Red Baron watch one of the thinnest on the market at the moment, with less than 8 millimeters thick. It is also one of the lightest in its style, weighing less than 100 grams.

The creative team of the Spanish brand Aviador Watch has designed a watch with a diameter of 44 millimeters, able to adapt equally to women and men thanks to the especially ergonomic design of its case. The dials of the Red Baron, in white, black or green, are of minimalist aesthetics and complement the “vintage" line straps, made of Milan Mesh, 24 millimeters wide.

All the watches of the Barón Rojo collection incorporate Japanese multifunction movements of proven quality, Seiko VX3N, which guarantee an impeccable running at all times. Baron Rojo watches communicate hours, minutes, seconds, 24-hour time, day of the week and day of the month.