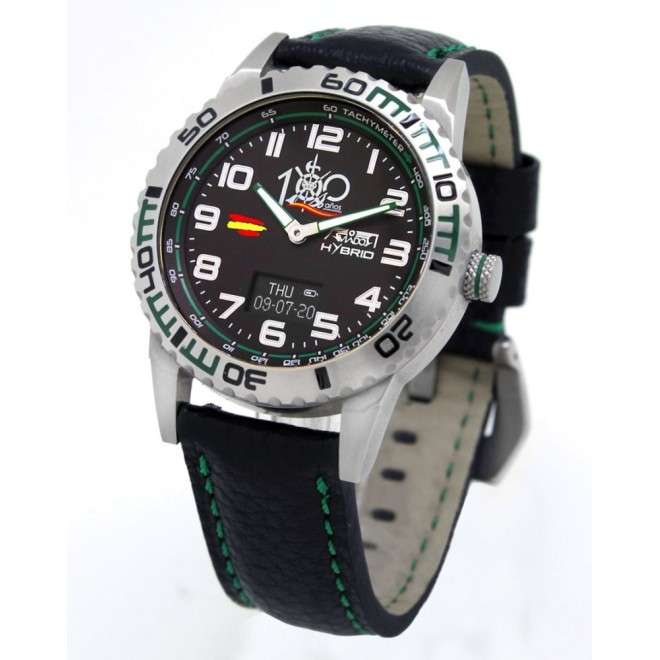 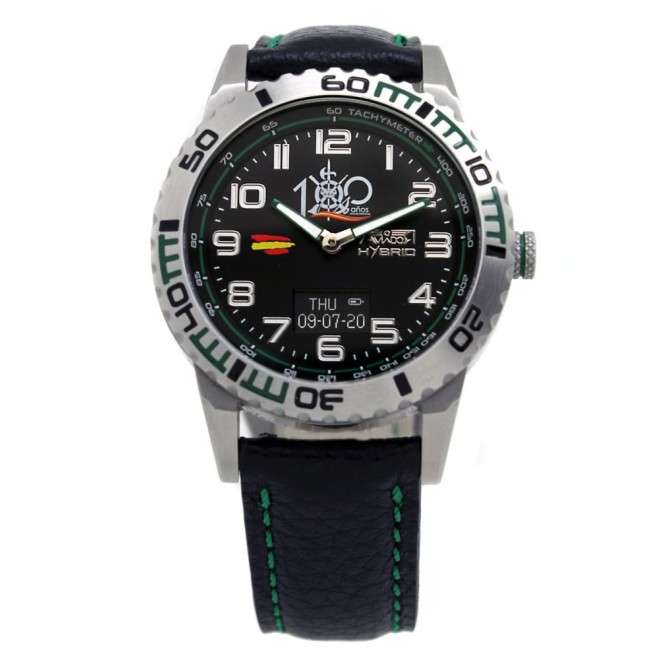 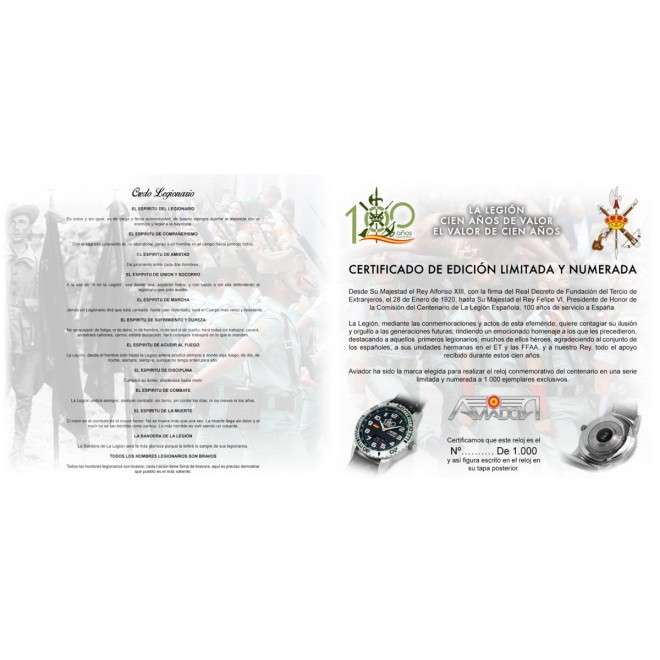 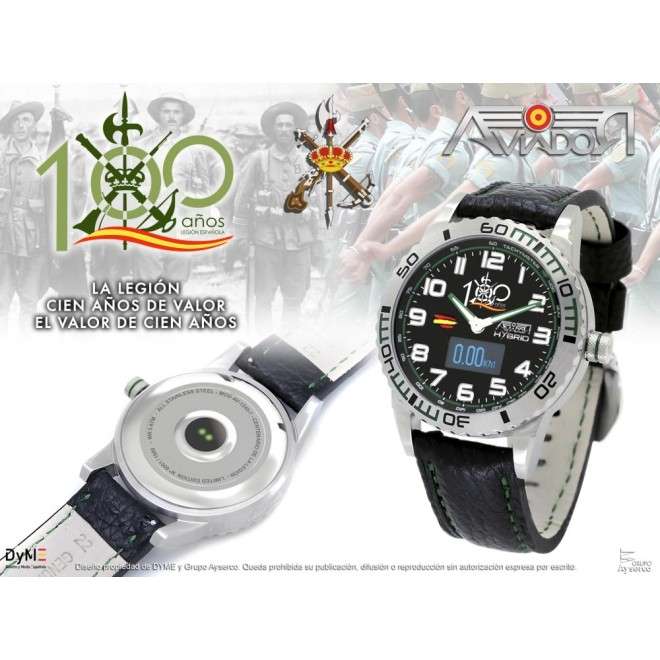 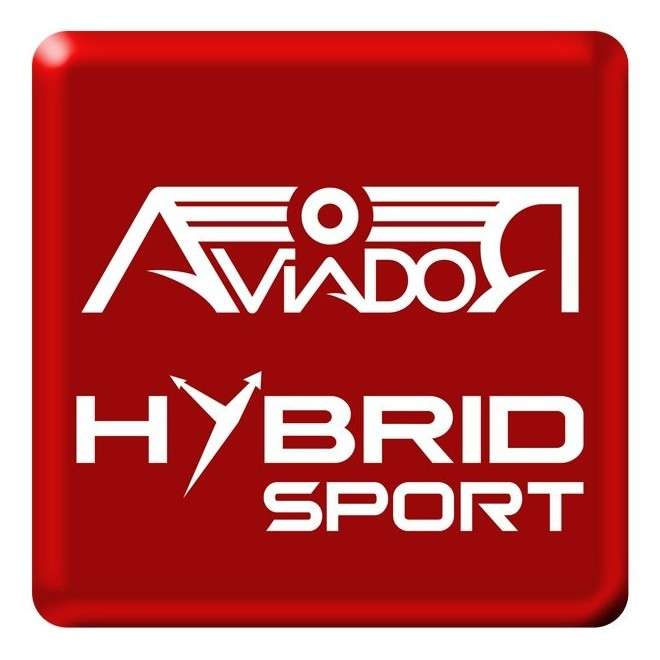 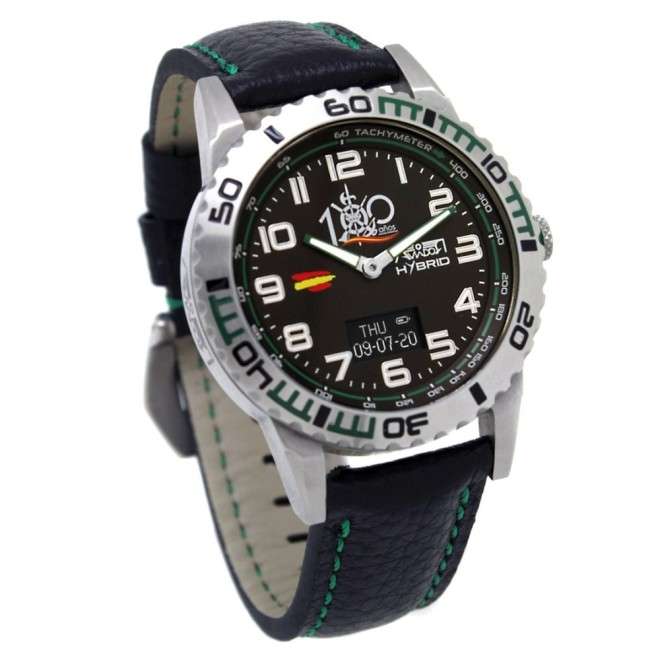 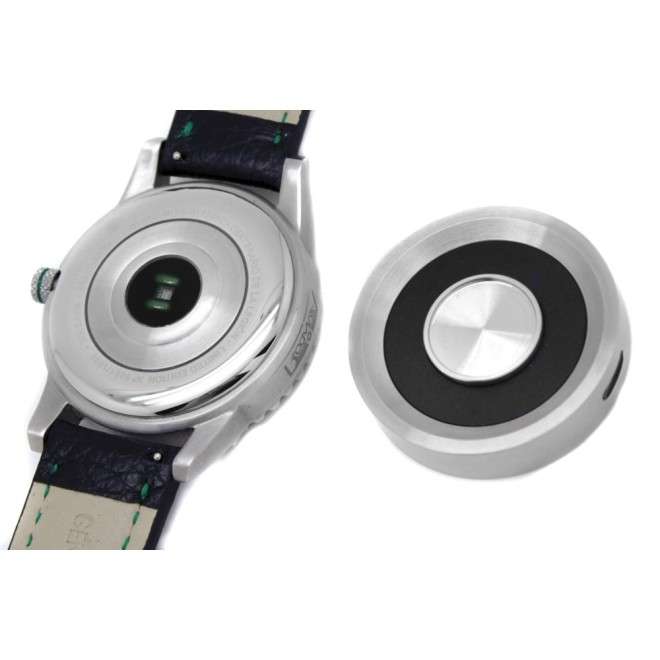 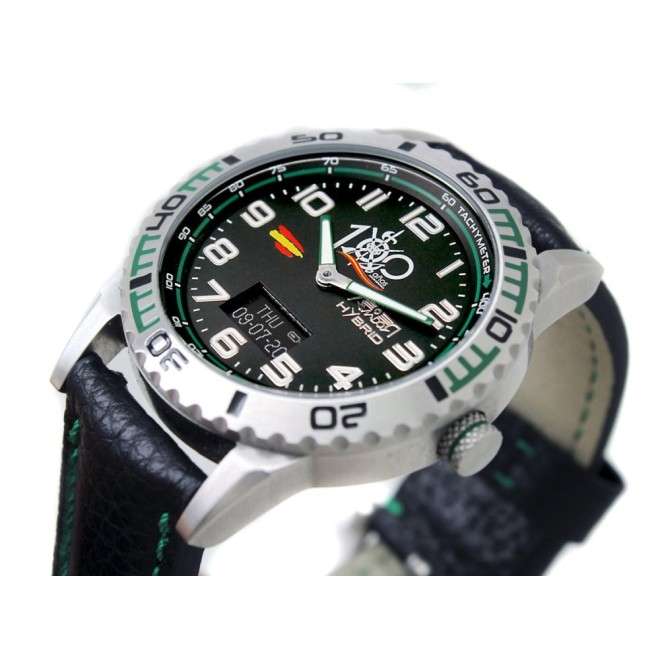 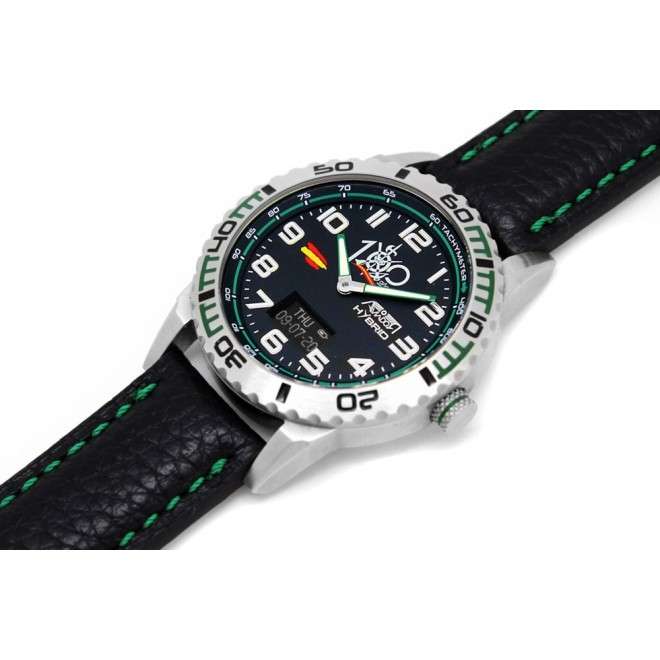 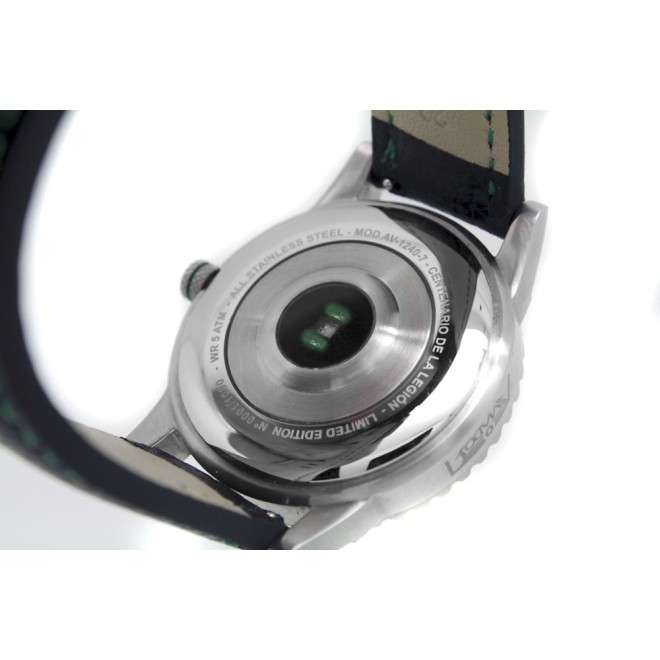 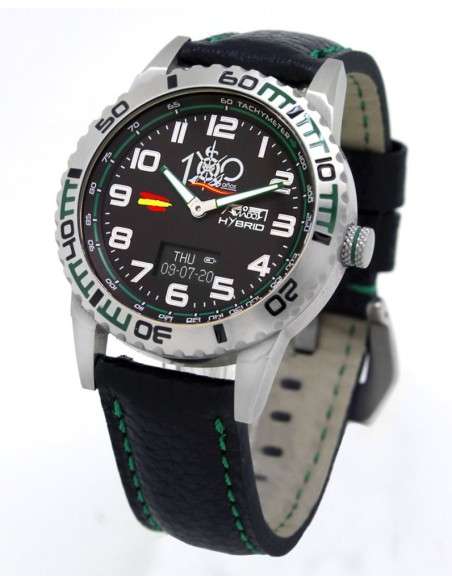 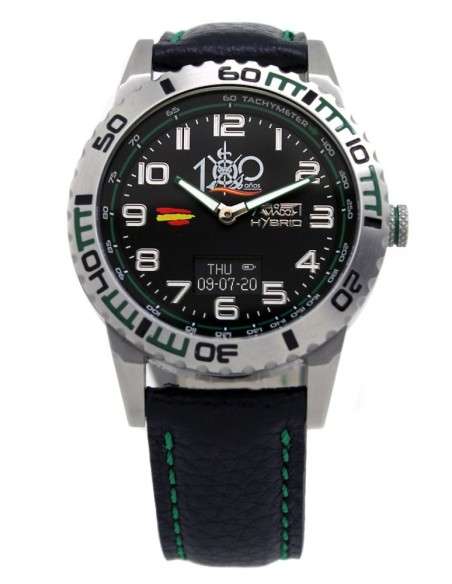 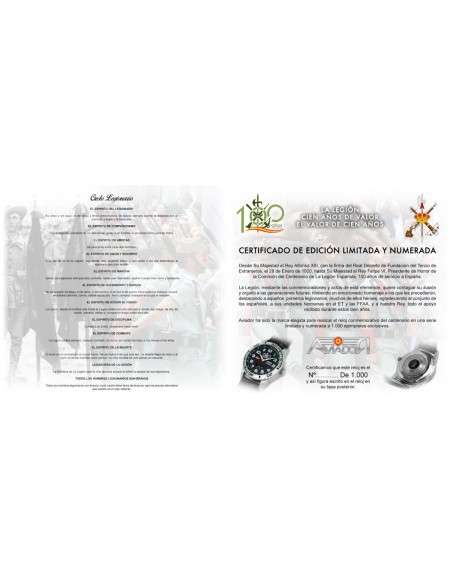 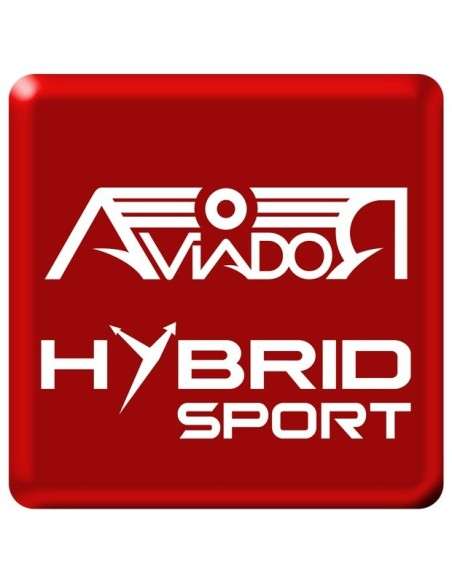 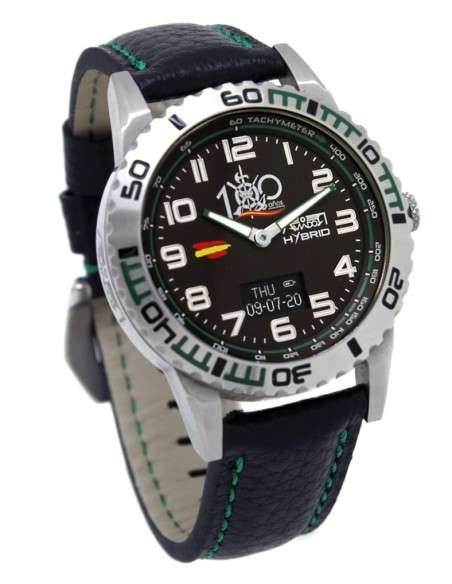 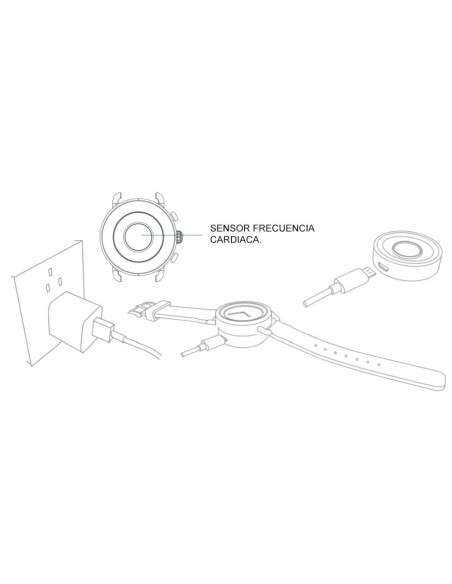 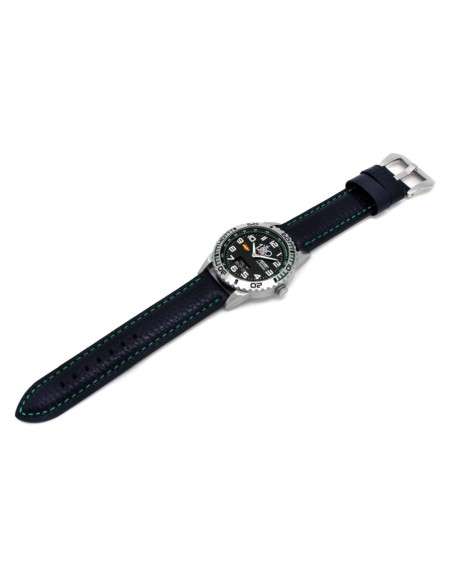 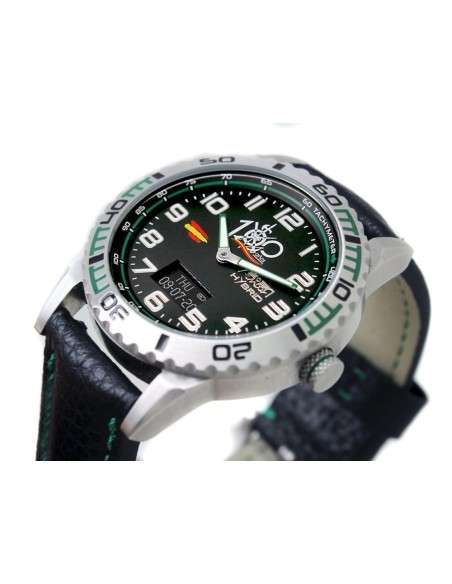 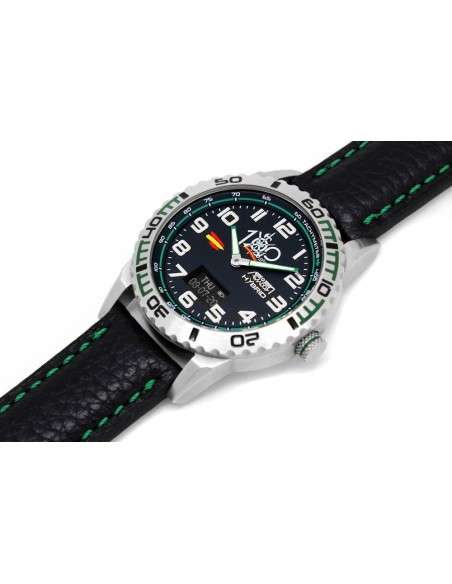 AVIADOR WATCH Hybrid Sport Centenary of the Legion. Innovative 44mm hybrid watch which shows information classical time permanently and incorporates, in addition, touch screen to receive all the mo informationvil, heart rate and activity data. Compatible with Android 5.0+ and iOS 9.0 or above. The Hybrid watch uses a battery with almost 30 days of autonomy.

The watch Hybrid Sports it is aimed at users who want to read the time in a traditional format, do sports and consult, at the same time, the news collected by the mobile.

Personalized watch with the emblem of the Centenary of the Legion.

The watch includes on the dial and on the back cover the emblem of the Centenary of the Spanish Legion. Created in 1920 by José Millán-Astray it was initially called "El Tercio de Extranjeros" in honor of the prestigious Spanish thirds that they had so much success and military prestige in Europe during the sixteenth and seventeenth centuries. The legion was born as a shock force for the harsh Moroccan war following the French example. This new force was intended to replace the forcibly recruited Units and replacement troops whose poor preparation and fragile morale was the reason for a large number of casualties

Nowadays "The Legion" is a military force framed within the Ground Force of the Spanish Army. The Legion is a Light infantry especially suitable for use in difficult terrain and varied weather, scenarios where the courage and training of the combatant reaches its fullness.

Numbered series and limited to 1000 copies

Aviador Watch has been the brand chosen to make the commemorative watch of the centenary of the Legion in a limited series and numbered to 1000 exclusive copies.

Pon the one hand the time, with its classic hands, always visible, and on the other hand the connectivity, which transmits all the information arrived to the mobile through the touch screen, located at six o'clock.

Digital display with 30 days of autonomy and analog clock with 1 year of autonomy.

The Aviador Watch Hybrids offer levels of autonomy practically unthinkable so far for the digital display: almost thirty days. That is: one month without using the charger. The new Aviador Hybrids use a single battery, which has banished the classic button batteries, betting on a solution respectful with the Environmentally friendly and comfortable for the customer. Charging is carried out by induction and in 20 minutes. The analog clock works independently of the digital one and its autonomy is approximately 1 year.

Watch Hybrid, is a cutting-edge development carried out for more than half a year by Aviador Watch.

22 mm leather strap with red stitching made in Spain in high quality leather. It includes the "quick release" system to be able to change the strap in a simple way without tools.